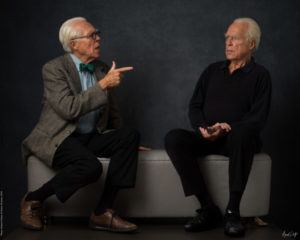 The cast of my ongoing project Above and Beyond was joined, recently – and perhaps fittingly – by the great American playwright John Guare. He is best known for his plays “Six Degrees of Separation,” “The House of Blue Leaves,” and “Landscape of the Body.”

Guare, born in New York City, is now 80 years old, and says he wrote his first play when he was 11.

His style, which mixes comic invention with an acute sense of the failure of human relations and aspirations, is at once cruel and deeply compassionate.

Guare’s plays have won every imaginable award, among them, many Obies, the Laurence Olivier American Airlines Award for Best New Play, several Tony awards, New York Drama Critics awards, and the PEN/Laura Pels International Foundation for Theater Award for a Master American Dramatist. In 1993 he was elected to the American Theater Hall of Fame.

After our photography session, Guare and I sat down to talk.

HS: You’ve said, ” I love theatre for recognizing that everything is something else.” What does that mean?

HS: You’ve also said, “Theatre is a place of poetry, suggestion and dreams.”

JG: Well, I couldn’t say it better myself, even if I did say it. That’s the best thing about the theatre, that the theatre is the place of transformation, and the removal of a mask. People go to theatre to see the mask removed.

HS: And, you’ve said, “Theatre has never been an easy place.”

JG: Never. How could it be? It’s always competition. On one level, just trying to get fannies into the seats. I can write something but how do I get people to come and see it?

The fact that a play even opens is a miracle. That you got X amount of people to come together to meet on a certain day — a director, a designer, actors — all to show up and tell the same story as the writer is telling, or even for all the people involved tell the same story. Everything conspires against getting a play on.

And then having it run is just beside the point. Anything else is pure gravy. The fact it even got on is what is extraordinary. But the competition is mainly to be heard. There are so many valid voices out there. Why should mine be heard?

Moss Hart said, brilliantly, “An audience will give any play 15 minutes of their time. They’re there; they’re yours for 15 minutes. And at the 16th minute they’ll decide if they want to go on that journey or not”

The audience comes to a play to be costumed, and a failed play means the audience chose not to be costumed in the garb that the playwright and the people on stage have chosen to confer on them. And that’s what that first 15 minutes is about. 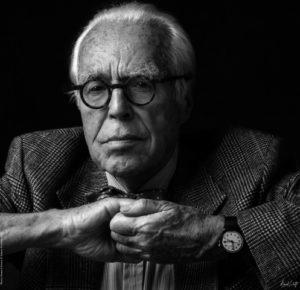 HS: Are there guidelines as to what ingredients need to be written into those first 15 minutes?

JG: The first 15 minutes needs to convey the central conflict of the play and the emotional coloration in which that conflict will take place.

HS: I recall that you said in writing House of Blue Leaves, the first act flowed readily, but it took you five years to complete act two.

JG: I didn’t have the craft to handle eight or nine people on stage. It’s a hell of a lot of people to know how to balance and not lose them. It took me a long time to learn.

Actors just can’t sit there. They have to be doing something. It’s maintaining everybody’s motivation and everybody’s action, because everybody, every character in the play, has to think that the play is about them or they don’t belong in the scene. It took me a long time to learn the craft of dealing with many actors on stage.

HS: The theatre is constantly coming up with innovation, new ideas, new ways of seeing things. Do you derive inspiration or ideas from seeing the plays of others?

JG: Of course. I see as many plays as I can. I love to go to the theatre. I have learned a lot. I watch a lot of the new technology. I don’t get seduced by it and say, oh, it’s new, let’s use it. I say, how can I use this? Coupled with less is more.

HS: What are you working on currently?

JS: We’re doing a new play, called, “Nantucket Sleigh Ride”, at Lincoln Center that opens March 18th, so I’m the luckiest guy in the world to have a new play, and an old friend, Jerry Zaks, who’s directing it. I love Jerry, and I’m loving the cast that we’re assembling. So I’m trying…Whenever I go into rehearsal with a play I like to have another play ready to work on the morning after.

HS: When you write, do you surprise yourself?

JG: I hope so. All the time, actually. You just say, oh, I didn’t expect that to happen. Every play has its own life. There’re no rules to apply. I mean, we’ve been working on Blue Leaves to go back to the past, 100 years ago, and I did not… never expected Artie to kill Bananas. It was never in any of the notes, never. And when it happened I was so upset I got up and I threw up.

The characters take on their true identity, where they really want to go, and you have to let them go, give them the grace to go. 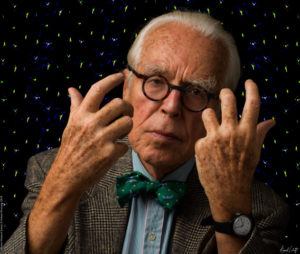 HS: What is curious to me, as an artist you have to turn your work over to others; the director, the lighting, costume, actors; set.

JG: No, I don’t. I’m sharing it with them. I’m letting them into the process.

HS: You have control?

JG: Yes, I do. If you check the Dramatists Guild contract, nothing can go on that stage without the playwright’s consent. The playwright can choose to give up that consent and allow the designer, or the costume designer, or the casting director to put whatever they want into the play. But everything that will be on that stage has to have approval of the dramatist. And that’s what the Dramatists Guild exists for… only for that purpose.

That’s what holding the copyright of our own plays means. Writing for movies is so humiliating, because you give it over and you don’t know what you’re going to see of anything. That’s why I love the theatre.

HS: What if a director wants to do this and you don’t want him or her to do this?

JG: I would fire them as I’ve done on a couple of occasions.

There’s a difference between disagreements and  coming to compromise, and understanding where you might be misguided. I’m not a fascist. There are some playwrights where nothing can be changed.

HS: Your plays are done in lots of different places.

HS: Does the opposite occur?

HS: I read about how Six Degrees of Separation came about, a story you heard. And then I understand about this young man who was a sociopath; a brilliant, imaginative, awful human being, how afterwards he then was resentful that you would write a play that was essentially, he thought, about him. And created pain in your life, I heard there was a lawsuit, there was a harassment.

JG: He was trying to kill us… it was like death threats. I don’t want to go into it. 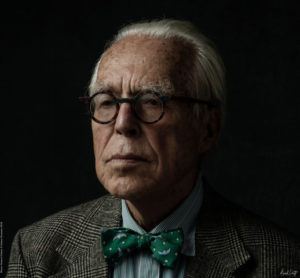 HS: Has the current administration in Washington affected theatre or your work?

JG: Sure; it’s screwed up everybody’s heads. Everybody’s…there’s nothing that we don’t see today that we don’t see in the life of injustice, of cruelty, of sheer meanness; relations between men and women. We can no longer look at things with the eyes of the tens, the nineties, the eighties, the seventies, the sixties, or whenever.