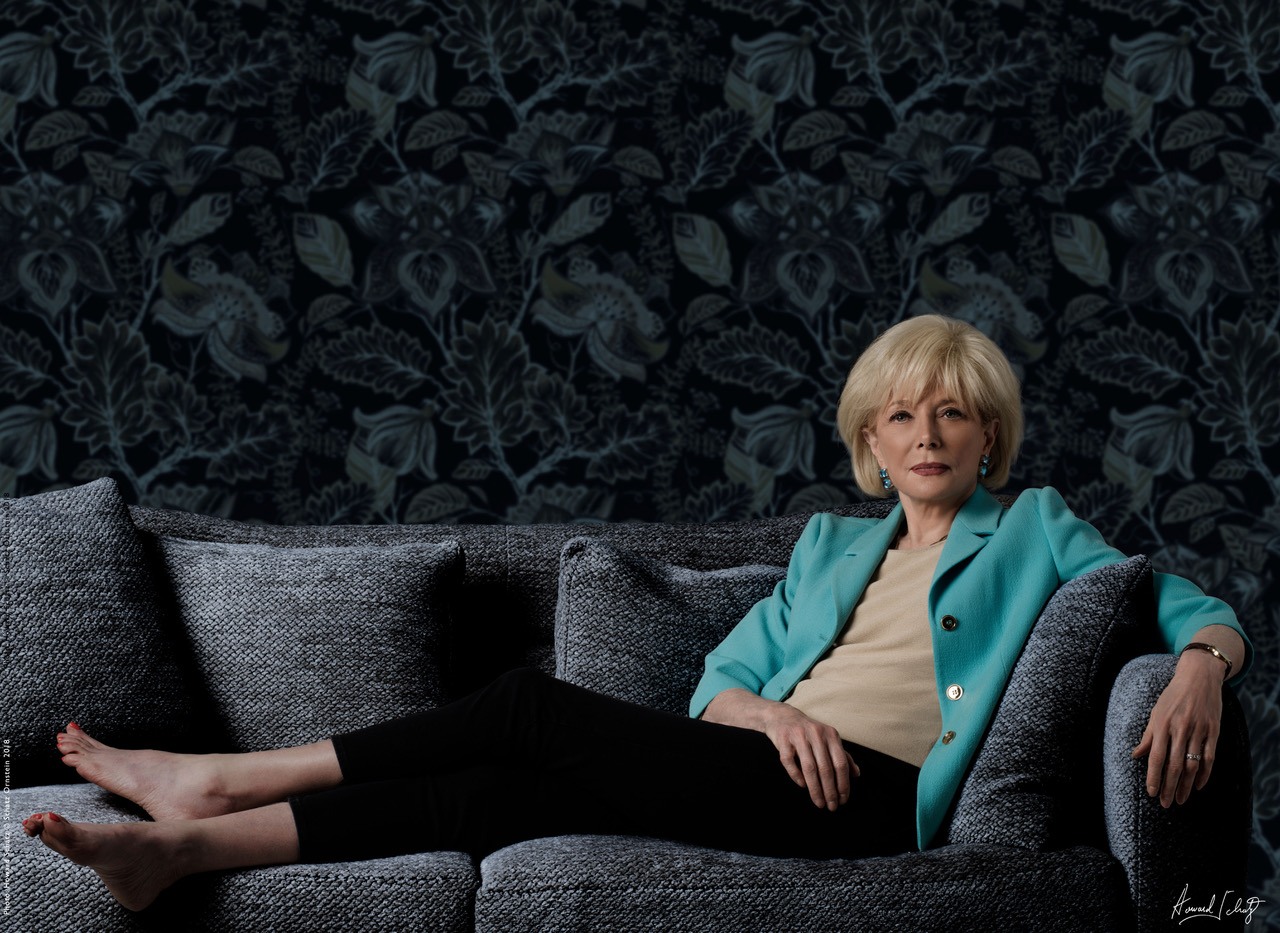 Lesley Stahl, the American television journalist, now 76, has spent most of her career with CBS News having been affiliated with that network beginning in 1972. Since 1991, she has reported for the venerable CBS news magazine 60 Minutes.

She was the CBS White House correspondent during the presidencies of Jimmy Carter, Ronald Reagan and George H. W. Bush. From 1983 until 1991 she was the moderator of Face the Nation, and hosted 48 Hours Investigates from 2002 to 2004.

Among her many journalistic awards are the Edward R. Murrow Award for Overall Excellence in Television, and the Alfred I. DuPont-Columbia University Journalism Award. Additionally, she’s won several Emmy Awards for her work on Face the Nation and 60 Minutes. 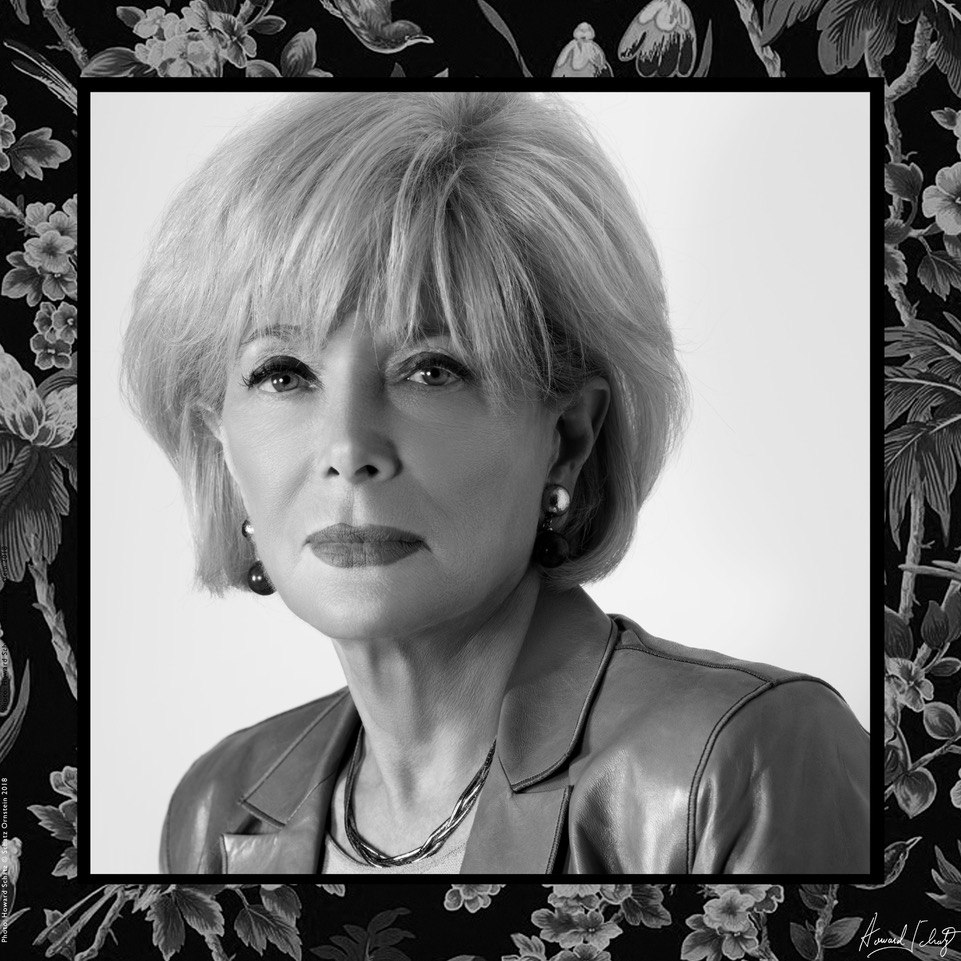 As is my usual approach during portrait sessions for the project Above and Beyond, I conducted an interview. Excerpts are below:

HS: Whether from inner passions, external forces, unexpected circumstances… how did you get to be Lesley Stahl?

LS: I had not been interested in journalism. After I came to New York, I was working for Mayor [John] Lindsay, and I happened to wander into his press room. I said to a fellow sitting there, “What do you do all day?“ He was a newspaper reporter and he told me in detail
what he did. He made phone calls, he was nosy, he sopped up serious information as well as gossip.

And I grew more and more and more excited at what he did all day. I said, “Why hasn’t anybody ever told me about this?” It was a thunderbolt, it was instant, it was huge. And I said, I have to do that.

I left my job with the mayor and found a job at NBC News. I worked on the 1968 presidential election. From the minute I started, until today when I’m sitting here talking to you, I’ve never lost that love I have for what I do. I’m not kidding.

HS: Was it a natural curiosity or something else?

LS: It was everything. It was the challenge of getting information. It was like a hunt. It was like being a warrior. I have to get this information, I’m on the trail, I’m finding it. I’m going to
conquer it. I like condensing everything into a story.

HS: You have a journalistic instinct that I think might conflict with your human sensitivity. Do you ever ask a question that you’re sorry you asked?

LS: At 60 Minutes our stories very often require tough questions. Mike Wallace, who may have been the greatest interviewer ever, called me into his office. He said, “Hey kid, you’re never going to make it until you learn to ask an embarrassing question without being embarrassed. I can do it. You have to learn how to do it.”

LS: Yes, I think so. It still hurts. I’ll tell you, it hurts to ask a mother about a child who has died. They’re there to discuss it. But it hurts to force them to go there. It hurts. It’s very
hard.

I don’t get embarrassed, but I will tell you that several people have walked out on me. Just thrown the microphone on the floor and stomped off. I had then president of Russia, Yeltsin, he stormed out. Sarkozy, when he was president of France, threw the microphone on the floor, said something vulgar in French and stormed out. I was asking the obvious questions–to me. And they didn’t like it and they were insulted, or in their country journalists don’t ask personal questions.

Sarkozy stormed out because I asked if his wife had left him. And you know, who wouldn’t ask that question? It was the biggest story in the country. But I guess reporters in France don’t ask things like that. 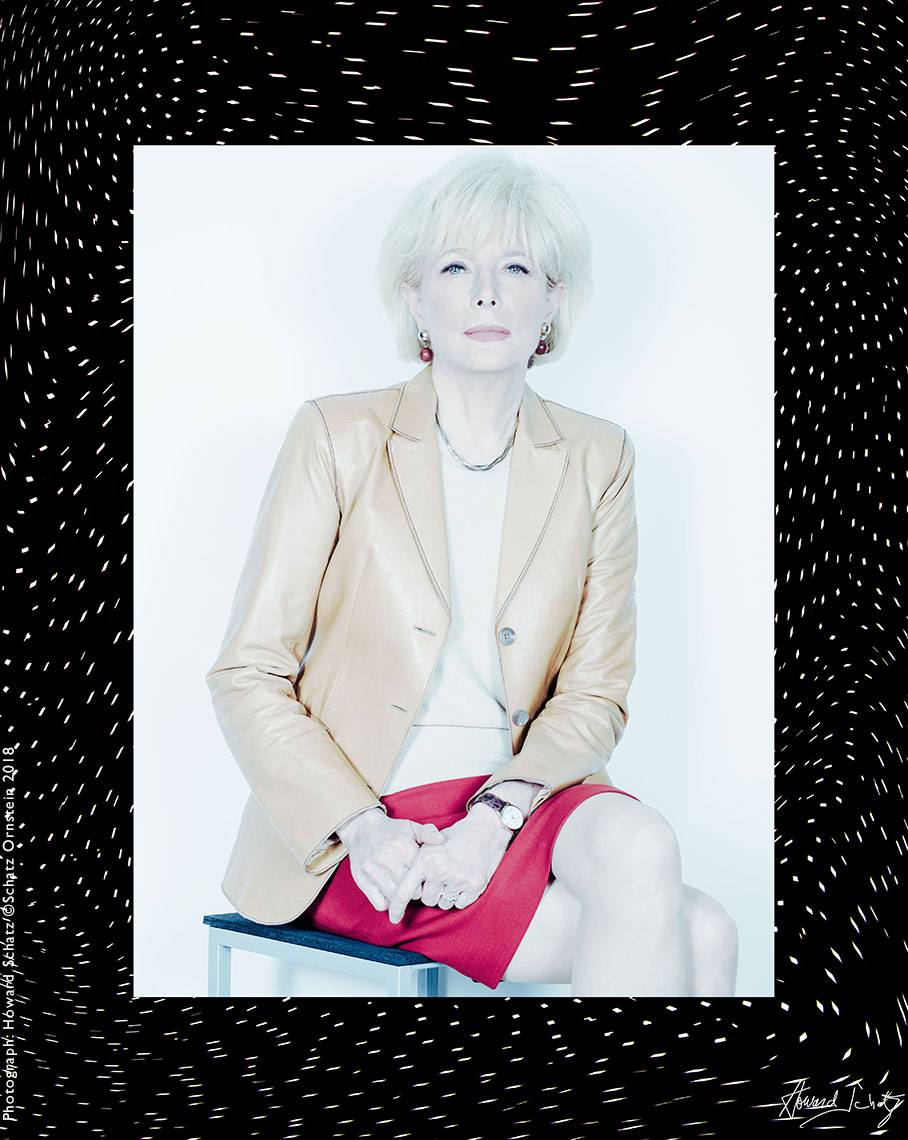 HS: And your interviews with our current president?

LS: He auditioned me. I had to go sit and be auditioned in his office. He wanted very much to be on 60 Minutes, because we are the place for anybody who wants to reach a large, sophisticated audience. And, we are a broadcast that covers everything with dignity. We’re not there really to shame people, that’s not the point. Trump wanted to be on 60 Minutes and gave it to me. He summoned me and my boss to his office before he agreed. And we spent an hour with him in his office. It went well. And I got the interview. I got two interviews.

He was charming. This is a side of him that a lot of people don’t see when they watch him giving his big speeches. He’s funny. I think he’s very funny. He asked us a lot of questions. It wasn’t a monologue at all. He was him though. He told me and my boss that this was the best
office in the world, and he had the best view in the world.

We got the interview. And at the end of that interview he said, you’re going to get my first interview as president, he promised it. And then he fulfilled the promise.

HS: How careful did you have to be? You’re at a place where he’s given you a gift. And has the potential to give you future gifts.

LS: Well, this was his first interview as president, or president elect. It was just two or three days after he won the election, which was a huge surprise. To everybody. And I mean everybody, including him.

He won’t admit it, but I saw a man in a state of shock that day. I covered the White House for ten years. I covered three presidents. And my position in my mind throughout was that you respect the presidency. Respect the president because it is the presidency. And I was determined to treat him with a great deal of respect. I asked him a lot of serious questions, focusing on issues. We had discussed that before the interview – my boss, and I, and my team of two producers. We talked about tone and the kind of questions and decided we would do issues. What happens with me in an interview is that I go in with questions. We kind of game it sometimes: If he says this, what’s our follow-up; if he says that, what’s the follow-up?

I work on these questions, they become mine. Even though I’m helped, we sit in a circle, and everybody throws questions. But they become mine, I know them. And then I listen. And if someone wants to go somewhere I’ll follow them. And I am totally there, as I am with you right now. I’m nowhere else.

HS: Do you ever cut anybody off because it is absolutely not going anywhere?

LS: A lot. A lot. I did Face the Nation which is live. The clock ticks. If you have a bunch of questions that are really important, you’ll cut in…you have to.

That isn’t what we do at 60 Minutes. If someone wants to talk for a while, we let them. If it’s really a filibuster, we’ll stop.

HS:  How have you built and maintained such an impressive career along with being a mother and wife?

Then I turned 35 and she went, “I was wrong. You have to have a child.” She said, “Don’t worry about taking care of the child and having your career. You must have your career. No matter what. If… I’ll live with you if you want, I’ll be your nanny.”

And my husband, as a writer, worked at home. So I had a great nanny, thanks to my mother. And I had Aaron, my husband, who had an office in our apartment. And so my daughter had people loving her at home.

HS:  One last thing: There’s always been fake news. People have always made things up throughout time. But now it’s so prevalent and permeates everything. I wonder what you think about it?

LS: I’m worried. I’m pessimistic about the future. Partly because of this insinuation about fake news, that as you say, absolutely permeates. How does 60 Minutes get caught up in what Fox News is saying? But we do. It’s the reputation that they have given news, and it seeps all the way through the system. And then the president starts attacking mainstream media. So, now we are all tainted. You see it in polls. People don’t trust the media anymore. You know, we are
essential to democracy, we are essential to this form of government that we have. 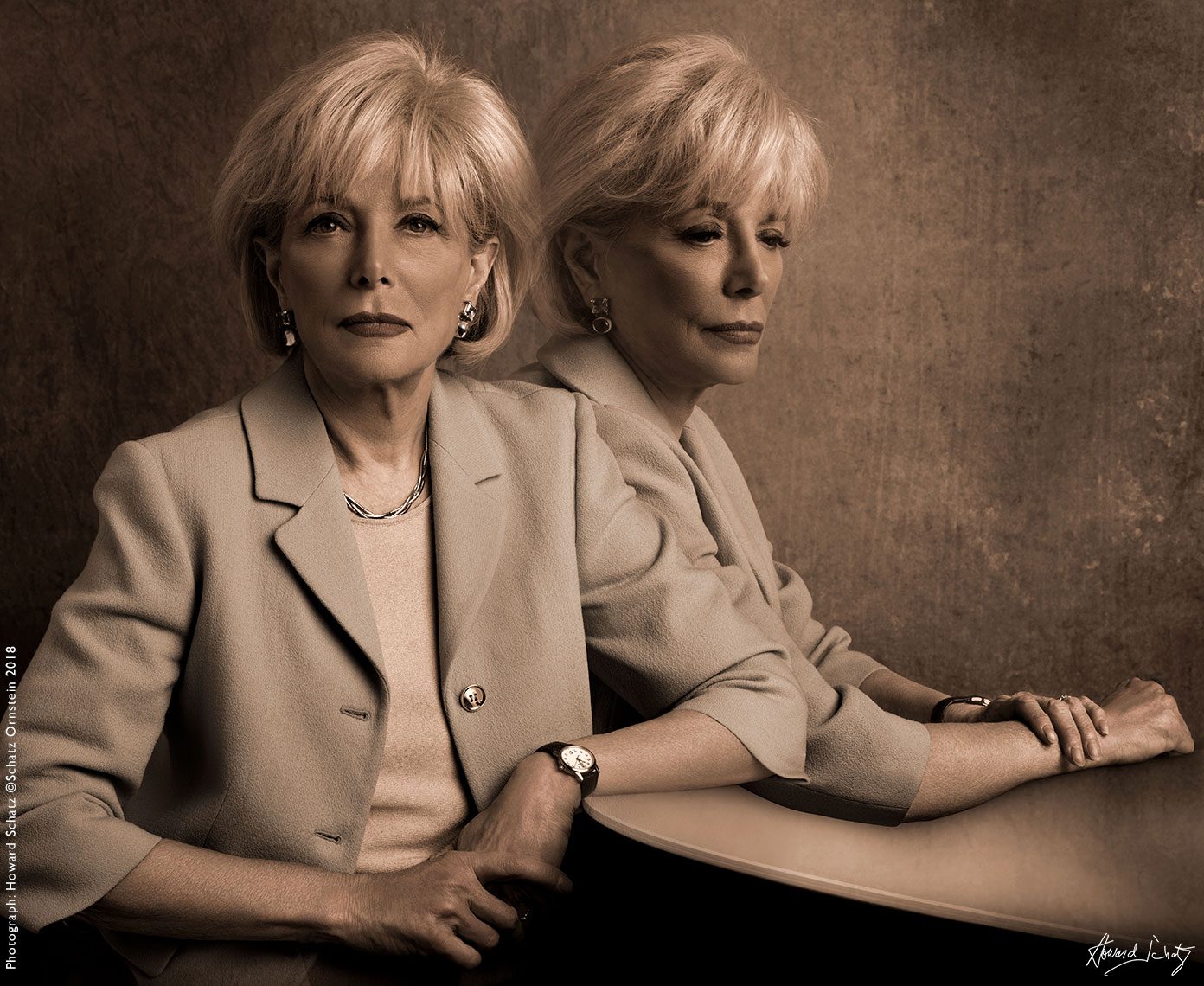 But if you have a press that’s weak we can’t ferret out corruption. It’s corrosive. Now what we have to do is just do our jobs. And we’re doing them the way they should be done, with our standards. The truth is the most important thing. As someone said, life is an act of courage, and we’re just plowing through this. But I am very dark about our survival.