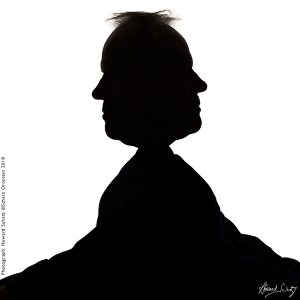 Among the first and foremost celebrity chefs and perhaps the best known is Wolfgang Puck, the 69-year-old Austrian-born chef and popular restaurateur. In my effort to widen the categories for the Above and Beyond project, we invited Puck to come to the studio.

Puck trained as an apprentice under Raymond Thuilier at L’Oustau de Baumanière in Les Baux-de-Provence, at Hôtel de Paris in Monaco, and at Maxim’s Paris. He moved to the United States at the age of 24, and in 1973, opened his first restaurant in Los Angeles, Spago, which quickly became the go-to eatery for Hollywood celebs and in 1982 was named one of the Top 40 Restaurants in the U.S..

This success enabled the restaurateur to launch the Wolfgang Puck Companies, which include over 20 restaurants, catering services, more than 80 Wolfgang Puck Express operations, and merchandise such as cookbooks, canned foods, and coffee products. Puck is the official caterer for the Academy Awards Governors Ball.

As usual with my Above and Beyond stars we began with an in-depth interview, followed by portraiture. 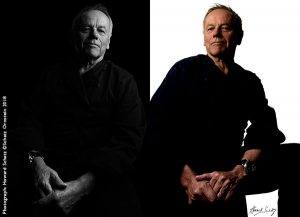 HS: Why do apparently successful restaurants close, and yet you’re still standing strong?

WP: I really believe a restaurant has to be part tradition, part evolution, and part innovation. A lot of restaurants open, become very successful, and little by little ride off into the sunset.

I changed Spago. First, I changed the location about 22 years ago. We moved from West Hollywood to Beverly Hills. The new space gave me more freedom, a bigger kitchen and other things. It gave us a second life.

Then, about six years ago, I decided, I’m bored with the way it looks. I shut it down for four months and remodeled the whole restaurant; it looked completely different. And we changed the menu and all of a sudden it started out again. So now, after  36 years, last year was our best year. We continue climbing.

There’s something inside me that says, “I cannot go up anymore.” And when I get that feeling I have to change. It’s expensive, but in the end it’s cheap. What is more expensive is if you go down.

HS: What were your original ideas at the beginning?

Also, that way the chefs cannot swear, we cannot throw things around, we have to be polite. When we opened Spago, the kitchen was really the stage.The chef actually came in direct contact with the customer. Before, there was always a line, a wall. Now, all of a sudden, the kitchen became the center stage, really the heart of the restaurant.

HS: You use the word quality a lot in many of your interviews. Would you define quality?

WP: People think of quality as it has to be caviar or it has to be Japanese beef. No. If I go in the garden and pick the perfect lettuce or carrot and it has the taste it should have, that’s quality.

HS: How do you maintain quality in your personnel?

WP: I cannot do everything, that’s true. You have to have a coach and you have to have players, and the players change over the years. Now I’m very lucky, I’ve had people with me since the beginning, for 35 or 36 years. 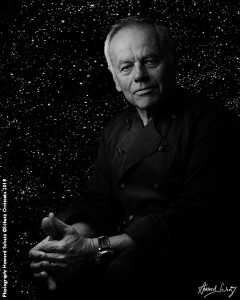 HS: To be an entrepreneur is very tough. You’ve said “running a kitchen is like running a war machine.”

WP:  Because it’s all about strategy. How do you get from point A to point B? And I often read about how the Ottoman army came to Vienna, how complicated it was to get 30,000 people moving from what is today Turkey all the way to Vienna.

In the kitchen, it’s very small, but with the same problems.  How do you get just the right amount of food? How do you prepare it the best way? How you sell it the best way? There are a lot of steps and you have to take care of every little step, no step is too small.

HS: Ruth Reichl told me about your test kitchen.

WP: I always want to change, I always want to figure out what’s new, and I know a lot of change comes from young people. So I said, I’m going to build this test kitchen; we call it Rogue. I’m going to have young people cook there. I have two young chefs there, and I have chefs from all different restaurants come and cook. And I told them, they cannot do anything we do in our restaurant. It has to be something they never did. I force them to  be innovators, how to get us to the next level.

We’re going to publish a book about it. We take pictures, we document everything. I have them write down, not the recipe, but whole the idea behind it and how they came to doing it that way. Because it’s the idea that counts.

HS: And you simply observe?

WP: I observe and I push them, because we make a 16-course menu and we change the menu every week. They have to come up with new ideas all the time. 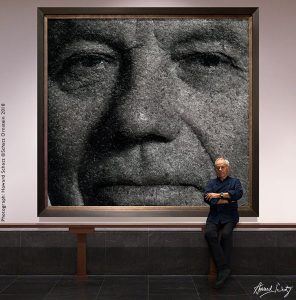 WP: You know, I’m so sad it almost makes me cry. Because this country was built on immigrants. We became a great country because so many different ideas, so many different nationalities from all over the world get together, and that brings out the best in them.

And the important part is, immigrants are positive. If you are not positive you won’t leave your little village in Europe, or in Asia, wherever it is. So you bring this positivity to this new country, the new opportunities you get. And I think the way people talk now about immigrants is like we are criminals.

I think it’s really a crazy idea to say, okay, let’s build a fence, let’s not let anyone come in anymore. Are we going to become this enclave and build a wall that says it’s only we who are important? What about the rest of the world? You know, we are lucky here; we can help so many people.

HS: Has it affected your business?

WP: You know, it does not because, I think, it’s still so new. Thank God we have very few people who leave us, we have people with us for many years. We have people who worked with us, Latino people, and now their kids work with us.

If you don’t have good tomatoes, if they rot on the vines, you’re not going to get good ketchup. You need these people.

HS: Tell me about your connection to Harvard Business School.

WP: I did an interview with the Wall Street Journal four years ago. The journalist asked me, what is your dream? I said, I want to go to Harvard.  I always thought that I should go to school. I never went…in Austria I grew up, I left school at 14, never went to high school, never went to any college, anywhere.

A few days after the article was published the dean of the business school calls me up and says, “Mr. Puck, when would you like to come to Harvard?” And I was, like, “Well, I don’t know, I don’t know when I’m going to go. I don’t even use a computer. How am I going to go?”

I called my son who lives in Boston, and his wife went to Harvard Business School too. I said, can you guys come over and show me how to work a computer? And then I got so nervous, I said, oh, forget it, I’m not going to use a computer. I’m just going to take notes, the old-fashioned way. At the beginning it was quite intense because you get so much information.

What was amazing there is that the professors are so passionate in teaching. And I told them, I wish every school would have people like that. I got so inspired. 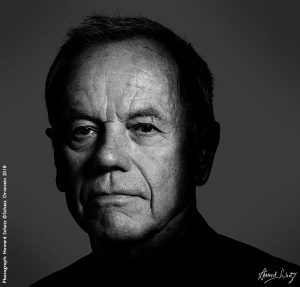 HS: What have you learned?

WP: One of the professors said, “Make a decent profit, decently.” And you know what, I always was thinking that way, because I always thought that if I want a community to be interested in me, I have to be interested in the community and to give back something. So this is really a very good line, and I really think it worked very well for me.

I also learned how to articulate my vision much clearer. Before I used to be a little vague. Now, before I talk to people, I really think about it clearly, because if it’s not 100 percent clear to me, how is it going to be clear to them?

HS: Who runs your business? Who hires and fires? Who negotiates the leases? Who buys the restaurant materials? Who decides on the lighting? Who does the music? You can’t do all this.

WP: I wish I could do everything, but we have a team. I have four partners, all with an interest in the business. I have Tom who is with me already for 36 years, since the beginning of Spago. He was a kid out of college and he became the manager of Spago, he spent all the time up in the office in khaki shorts and a polo shirt.

When we opened in Las Vegas, he moved to Las Vegas to stay two years. He still lives there after 25 years, has a family there and is very well-regarded. He does all the negotiations about our new businesses.

And then I have Lee, with me for almost 30 years. He goes from restaurant to restaurant around the world and checks that they really stick to our guidelines so that I don’t have to go everywhere.

HS: Why do you go anywhere if they can do all that?

WP: I go because the restaurants are like my children, so I want to go, I don’t have to go.

HS: You’ve catered the after party of the Oscars for 20 years. Do you need to top yourself every time?

WP: With the Oscars it’s a great experience not just for me, but for all our people who work on it. We push ourselves always. Now, I have a lot of people working in two kitchens all day long. We have 300 people in the kitchen; 600 people working in the dining room. For 1,600 people we make about 25,000 dishes. All small plates, all small portions, so that way, if you’re hungry, you can have eight different things. 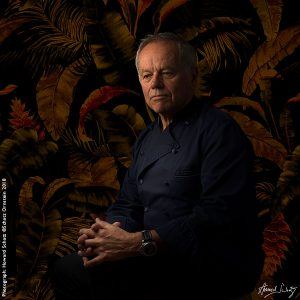 HS: Finally, would you define creativity?