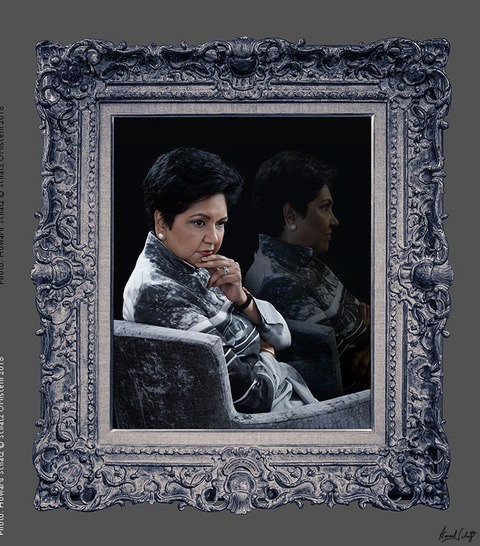 Indra Nooyi is consistently ranked among the world’s 100 most powerful women. She served as chairman of PepsiCo, the global food and beverage giant, and for 12 years, between 2006 an 2018, was that company’s CEO.  When I was looking for exceptional people for my “Above and Beyond” project, she was an obvious choice.

Nooyi is an immigrant from India who received bachelor’s degrees in Physics, Chemistry and Mathematics from the University of Madras in 1974, and a graduate degree from Indian Institute of Management in Calcutta in 1976. In 1978 she was admitted to the Yale School of Management, where she earned a master’s degree in public and private management in 1980.

After joining PepsiCo in 1994 she was named CFO in 2001, and then president and CEO in 2006. She left these positions in August of this year.

HS: You’re an immigrant. You brought to this country treasures, the treasures of your intellect, your skill, your ability to work hard. You’ve had a meaningful effect on the lives of tens of thousands of people. I wonder how you feel about our current issues with immigration.

IN: I came into the country in 1978, and I came in legally. I was a skilled immigrant and I followed the rules. I enjoyed all the benefits that this country gave me in terms of welcoming immigrants, celebrating them, the meritocracy that the country was. So I’m an immigrant, a product of a well-established system. I think today we have both kinds of immigrants. We have those skilled immigrants, then we have people fleeing persecution.

HS: If you were the President of the United States what would you do about immigration?

IN: I would have to sit down and have a bipartisan group talking about what should be an immigration framework going forward and not have any sort of hard opinions right now. I’d really want to debate the best way to handle people fleeing persecution. People just coming into the country because it’s the land of opportunity, versus the need for certain skilled people because we need to have a country that’s encouraging of innovation, welcomes people who can advance the agenda of the country.

HS: You’ve made a comment, “Companies don’t run on spreadsheets.” Can you explain?

That’s not the way you look at a company. It’s not looking at a certain index or a certain relative number and then saying this is what your numbers should be. It’s really understanding what the company is trying to do. As sales go up, for example, let’s say our sales went up from $35 billion to $60 billion over eight or ten years; R&D as a percentage of sales might actually come down, even though the dollar amount goes up significantly.

So I think behind every number there’s a story, and very often people look at it as a two dimensional model when there’s really three and four dimensions to understand the complexity of a corporation and all the levels that have to be tweaked. The spreadsheet is a starting point, but it is not the end of the story, and that’s my biggest concern with the way companies are analyzed today.

HS: Business decisions are, in a way, educated gambles. I look at courage as not the absence of fear, but the capacity to act despite our fears. You have to make decisions based on your ability to predict the future as accurately as you possibly can, but nobody can predict the future.

There are CEOs who have made informed decisions that have ruined companies. How do you make big decisions knowing that there are negative consequences that can occur that you hadn’t counted on?

IN: As a CEO, you’re making decisions multiple times a day, or ratifying somebody’s decision. And you’re always betting the company’s dollars when you make a decision. Typically, you do your data analysis, get all the data, look at it and make a decision. I actually think looking at the data is just one part of decision making.

Decision making is part data, part walking around and getting a gut feel for the market, for the consumer. Then it’s instinct; sometimes the data says one thing, but your instincts scream something different, and how you tumble all these three, along with the company’s ability to implement. You put the four together, you then make a decision, and you do that so many times you sort of develop a sixth sense.

Now, will you make mistakes? Absolutely. What you hope for is that your hit rate improves over time.  That’s the best you can do. You know, as a new CEO your hit rate may be a little bit better than 50. As you become a seasoned CEO, the hope is that you’ve been through the tough processes multiple times, and your hit rate starts to go up to 70 or 80. If your hit rate is always 100, then you’re really not taking chances. You’ve got to give yourself some room for error and failure.

IN: Externally, yes. You know, when you’re in front of everybody else you do have to have a thick skin, and you’ve got to make the decisions that may not work out. But when you shut the door and sit in your office, I think most CEOs have a thin skin. I do. I shut the door and then I agonize over decisions that didn’t pan out, because nobody wants to bet the company’s money on something that didn’t work out. But externally you say, okay, guys, we gave it a good shot, it didn’t work, let’s move on.

HS: You seem to have a genius for not having emotions that affect the result of your instinct, that your instinct seems to be rather crystal clear.

IN: I wish I could feel that way.  Instinct is not something that is just touchy feely. Instinct is also something that you should be able to rationalize, because when you feel something, you can’t just say I feel this, therefore, let me go do it.

You marry your instincts  with data and observation. You’re rolling the dice on a lot of dollars, so the instinct that you have is based on past experiences, reliving past failures, all of that together creates a gut and a fear inside you that you want to tap into as a positive force, rather than a negative force that holds you back.

What happens is every time I have to use my instinct to make a decision, I have to justify it to a lot of people, because sometimes people come to me and say, Here’s the data, this is what it shows, we’ve got to do this. And I say, you know what, it doesn’t feel right, let me tell you why it doesn’t feel right. Then I have to talk about disparate experiences and observations, and why together they create a fear in the pit of my stomach, and why I think we ought not to go that way.

HS: You’ve been the CEO of PepsiCo for 12 years.

How have you changed?

IN: I’ve matured in so many dimensions. I have a bigger experience base when it comes to assessing people.

Now, the worst thing I can do is to say we tried this ten years ago, so we’re not going to try it. That’s the worst thing anybody can do, so I’m trying my best not to do that. If somebody comes to me with an idea that we tried ten years ago and it didn’t work, but they want to try it again, I say, good, let’s give it a shot. Let’s talk through why it didn’t work then, why we think it’s going to work now. You know, what’s changed in the world? What’s changed in consumer taste?

HS: I’ve heard a few times that CEOs are “powerless.“

HS: Another quote that I love very much, “Business cannot exist independent from society.”

IN: Very true. That’s something that I feel very strongly about. You know, businesses are large entities that employ people and change societies in many ways.

Every company operates within a country, a community and employs a lot of people who are mothers, fathers, brothers, sisters, aunts, uncles. We have to recognize that we have to be a positive force in every society.

We have to make sure that all the employees that come to work for us in the company feel great about coming to work, so that they bring their whole self to work. And the only way they’ll do it is because they can go home and say, I work for a company that’s doing something good for society.

HS: Do you think being a woman is behind that idea? Because women tend to be caregivers, and you’re caring about society and how your company affects it and is affected in it?

IN: I don’t know if it’s a female/male issue alone or it’s because I was born in an emerging market where I saw both the benefits and the negatives of big companies on society. And informed by my travels around the world, where I watched how people interacted with products. I think I was more informed by an incredible world view, perhaps tempered with some emotion. I think the people side might have been more tempered with my emotion, which may have been driven by the fact that I’m a woman, I don’t know. I don’t know what it’s like to be a man, so from my perspective, this is all I know.

HS: You gave a talk at UCLA and you learned about the school’s great basketball coach John Wooden, who spoke about “leading a better life.” How do you lead a better life?

IN: My first responsibility is to my family. My daughters, 33 and 35. My husband, my mother, who is alive, my extended family, my first responsibility is to them because I’m the only mum they have, I’m the only wife my husband has. We’ve been married 38 years. I try to be a better mum and a better wife and a better daughter all the time. I’m not sure I’m successful, but I try my best. But my CEO job is an awesome responsibility and it consumes you. Even though I say my family comes first, the CEO job absolutely consumes you.

HS: What is your future?

IN: I don’t know. I know I want to do something different. I want to advance this whole discussion about how do we create a society where we allow people to have a life and make a living. What kind of protections do we need to give them? What does society have to do for them? What do governments have to do? What do companies have to do? I’d like to develop a framework and talk about it in a sensible way, not just talk about the problem, but talk about sensible solutions.